Yeah, that's a household acronym. You're down with CMB, yeah, you know me!

Color Me Badd had a bunch of hits off their first albums (conveniently titled "CMB").
The band was discovered by Kool and the Gang, so maybe they have a little cred.

Before I get to the song, I find this video hilarious and fascinating and UTTERLY CONFUSING. The CMB guys are walking along a beach. And then they find a treasure chest. With pictures of the band in it. They hang these pictures--of themselves--on clothes lines. Then they head to some rocks to urge you to 'dream away". What does it all mean, CMB? 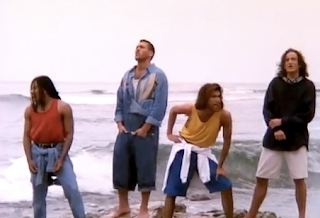 I did my best with the Spanish verse in this song. I took French, so please pardon me if I'm saying something that is inane.

(Sidenote: the guy who sings the Spanish verse seems so uncomfortable in front of a camera. I feel so bad for him. He like...is always trying to be occupied...drawing a stick in the sand, mugging thoughtfully, leaning in this strange manner--see the guy on your left in the yellow shirt. Poor guy).

And that is my song analysis.
Posted by Siobhan O'Malley at 11:01 PM No comments:

"Love Will Never Do (Without You)" was her seventh (seventh!!) single from her album "Rhythm Nation 1814". This song made her "the only artist to achieve seven top five singles from one album" (Wikipedia). Wow!

"Love Will Never Do..." was written by James Harris III and Terry Lewis, who wrote most of the "Rhythm Nation" album.

I remember this video as being sort of shocking....in all the other videos we had seen up to that point from "Rhythm Nation" Janet was heavily clad in military jackets, thick pants and boots and structured hair. All of a sudden, we see this barely-clad Janet, her hair all loose and blonde, and probably about 25 pounds lighter....it was a very fast transformation! 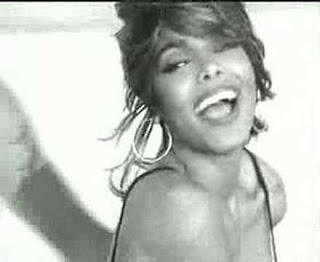 I think this song totally holds up as a fun feel-good pop song. The sing-along chorus at the end is super-catchy and Janet seems all spunky in it...especially when she says "What?" before the last chorus. The recording of this song has an air of spontaneity to it.

According to Wikipedia, this song was originally intended to be a guy-girl duet...they were trying to get either Prince or Johnny Gill to sing it with her. But it never happened. So in the recording booth, Jimmy Jam said " 'Sing it low like some guy would sing it.' As a result, they kept the idea of her singing the first verse in a low octave but go an octave up on the second verse"....That is a total happy accident--her singing intially low and then breaking out into her higher register gives the song a lot of momentum and drive.
Posted by Siobhan O'Malley at 1:45 PM No comments: