The #7 song of 1989 was written by Larry Henley and Jeff Sibar. Originally a country hit in 1983 with Gary Morris. Then Bette Midler did her version of it and the song appeared in the film "Beaches".

I have a very personal association with the song, so I sort of love it--I know it may be a cheesy song--but i can't help it.

My sister Jean and i --gosh, i'll have to corroborate with her on this--but i think we gave each other cards for some event (christmas? graduation?) and both of us basically said something to the effect of: "i know it's cheesy but you are the wind beneath my wings"....so whenever i hear of this song, i think of her.

Posted by Siobhan O'Malley at 7:38 PM No comments:

Email ThisBlogThis!Share to TwitterShare to FacebookShare to Pinterest
Labels: 1989, bette midler, wind beneath my wings

Milli Vanilli make a repeat appearance in the top 20 Billboard hits of 1989. Their 2nd single to crack the top 20 was "Girl You Know It's True" by Milli Vanilli. See my other comments on Milli Vanilli here, if you are interested.

Just watched the truly bizarre video for this song. One member of Milli Vanilli basically aggressively chases this woman around a city--through a car, into a telephone booth. At one point she pushes him into a table. Jeez! I would just like to say how BAD the choreography is....it's just awful. I think because it's so half-assed....There are full body shots of both Rob and Fab and they dance, like, every other measure. It's just such a strange choice--dance or not! I am just fascinated as to why the director of this video made this choice.

If you look at the credits for this song, the amount of people involved seems kind of mind-boggling and "it seems that the project had meddling input from virtually everyone except the duo themselves". The actual Man Behind The Curtain songwriters for "Girl, You Know It's True" were Bill Pettaway Jr., Sean Spencer, Kevin Lyles, Rodney Hollaman and Ky Adeyemo. I had no idea that "GYKIT" is a cover song by a rap band Numarx.

Some lyrics worth mentioning:
1. "you are the one i think about most every time".
"MOST??" i mean....if you are really trying to convince "it's true" then ditch the "most", please!

2. "you're pretty plain and simple"
ouch!! are you really trying to win her over? or give her a back-handed compliment? "eh, you're kind of ...homely and not too special....but girl, you know it's true"

Posted by Siobhan O'Malley at 7:01 PM No comments: 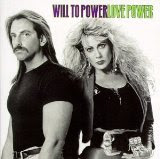 I would first like for you to take a look at the picture to your left. These people had the #9 song in the country in 1989. I'm sorry, but that would just not happen now. It just wouldn't! A motorcycle man and then a big haired vixen? As a duo?

But in 1989, they were the hottest thing around.

Will to Power had a brilliant idea....a cash cow, really: why not mesh two of the biggest hits of the 1970's into one medley?? And put it out now (now meaning: 1989)? So they mushed together "Baby, I Love Your Way" by Peter Frampton and "Freebird" by Lynyrd Skynyrd. BRILLIANT. If you don't see me for a little while, it is because I am doing a mash-up of "Hey Ya!" and "Single Ladies (Put a Ring On It)", two of the biggest hits of the 00's. Then I will be a millionaire, just like Will to Power.

This video is kind of hilarious. If you have a moment, please go back and look at the original. The first shot is a close up of a book by Nietzsche conveniently titled "Will to Power". The female singer Suzi Carr is writhing around on a beach and a recording studio and Bob Rosenberg then rides in on a motorcycle, his mullet blowing in the wind, his handlebar moustache rustling in the breeze.
Watch the Video

Despite this, Will to Power have an interesting beginning. Rosenberg was a DJ in Miami. Suzi Carr was a singer-songwriter who helped pen some of Miami Sound Machine's hits. They hit it off and started making music together.

Posted by Siobhan O'Malley at 12:18 PM No comments: 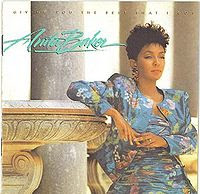 The number 10 song of 1989 was "Giving You the Best That I Got" by Anita Baker, R&B songstress extraordinaire. This song reminds me of dentist offices. I feel like whenever I am at the dentist, this song is playing. I suppose that is because it is smooth and calming. Or perhaps my dentist is trying to hypnotize me into with the sultry voice of Ms. Baker, I have no idea.

The cover of the album (above) to me is just soooo 1989. The hair, the lighting, her outfit, the setting. Everything. This is another song that falls under that "soft rock" category....not sure if that genre really exists anymore...it has melded into so many different subsets.

I didn't know this song very well--it's a bit of a challenge to learn. The melody sort of goes all over the place--lots of jumps. Which is all well and good when you are Anita Baker--not so much when you are Siobhan O'Malley! I knew the hook (where she sings the title), but I didn't remember the verses very well.

Posted by Siobhan O'Malley at 6:41 PM No comments:

Email ThisBlogThis!Share to TwitterShare to FacebookShare to Pinterest
Labels: 1989, Anita Baker, Giving You the Best That I got, Randy Holland, Skip Scarborough, soft rock

I remember owning a single of the #11 song of 1989, which was "Right Here Waiting" by Richard Marx. It was a blue cassette tape. I remember listening to it and thinking, wow,what a nice man that Richard Marx must be!

This song has been covered many, many times. I am joining the ranks.

Richard Marx had this big hair and these big eyes. I think he was supposed to represent the sensitve, attainable guy. And the plan worked. He had some huge singles in the late 80's and early 90's.

I always enjoy the story of the professional back-up singer who goes on to put out a debut smash (see: Sheryl Crow, my idol). Marx sang back up for Whitney Houston, Madonna and Luther Vandross. Meanwhile, he was writing his own material and slipped Kenny Rogers a demo of his work. Rogers loved it and went on to record two of his songs, "Crazy" and "What About Me?"

Marx then started his own songwriting and performing career and "became the first solo artist to reach the Top 5 with his first seven singles". Wow!

I put my piano/keyboard on the harpsichord setting for this song. It kind of sounds ridiculous, but that is part of the fun.

Posted by Siobhan O'Malley at 1:12 AM No comments:

I wasn't even sure if I knew this song--I saw the title in print and it didn't ring any bells. But then I looked up the video on youtube and realized I totally knew this song...I somehow thought this song was from a much earlier year. Maybe 1985 or 1986.

Boy Meets Girl consisted of a real-life married couple, Shannon Rubicam and George Merrill. The late 80's/early 90's was the last hey-day for soft-rock. Before Alanis came in and threw everything out of whack!

The song was written for Whitney Houston but she didn't use it....Later the song was "offered to Belinda Carlisle who recorded a demo of it for her Heaven on Earth album. The track remained unreleased, although the demo was later leaked. "

This song has a lot going on in terms of structure. A Verse A / Verse B part / pre-chorus / chorus/ outro....Definitely exciting for me to play a song that has a bit more going on...still no bridge though! (See every other song I have covered so far from 1989...not a bridge among them!).

I just went back and watched this video and had a few thoughts:
1. I'm not sure who came on the national scene first--Kimmy Gibler (the character from the sitcom "Full House") or Debbie Gibson...They totally have the same style! That curly bouncy hair, scrunchie, drop waist velvet dresses. Maybe the same stylist worked on both "Full House" and Debbie Gibson's video.
2. There are some close-ups of Debbie that remind me of close-ups in Britney Spears' video of "Hit Me Baby One More Time". I think they remind me of each other because it this conscious choice (maybe by the record label or the director) to show the world "Here is this innocent teen idol. Here is her face. Don't you want to be her friend? Get used to this face because you will not be able to escape it for the next few years."
3. Debbie Gibson wears this hat in a few scenes in the video that made me laugh. It is entirely improbable that the hat could stay on someone's head without Krazy Glue or some very dedicated PA. It is near the back of her head, right near her nape.

Anyways...enough about the video!
This song was a sweet little power ballad. Some notes about the song:
1. This song modulates three times! Pretty extreme.
2. Again, bridge-less song. Where, oh where did bridges go in the late 80's?
3. Interesting factoid: " Gibson was the youngest artist ever to write, produce, and perform a Billboard Hot 100 # 1 hit single (in the USA) with her song 'Foolish Beat' ." Not bad. I was pretty impressed that she was 16 and producing her own songs!
4. "Lost In Your Eyes" is from Gibson's second album, "Electric Youth". I remember LOVING "Electric Youth". My friend Jenny and I made up dances to it-- I remember thinking: "Maybe I too am an Electric Youth!!" Ha.
5. The music and lyrics are both written by Debbie Gibson...even when I'm not too excited about a song, I do get excited by pop artists that both write and perform their own work. It's not all that common. So, hat's off to you, Debbie!

Posted by Siobhan O'Malley at 3:56 PM No comments: